The latest issue of the newsletter neuroDEVELOPMENTS examines whether adult human brains can produce new neurons.

To build a brain, a chain of events is repeated over and over to generate each new brain cell, called a neuron. Precursor cells first divide to make an intermediate-stage cell, which in turn divides to produce a neuron-to-be. This newbie will migrate to its destination within the developing brain, where it will then mature into a full-fledged neuron. Repeat this billions of times, and a brain takes shape. 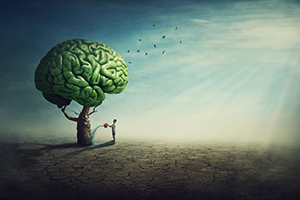 In humans, this process is thought to halt soon after a baby is born. But in other animals like mice, new neurons continue to be born into adulthood at low levels, particularly in a region called the hippocampus, which is critical for learning and memory. This has kept alive the question of whether human brains also maintain this ability, in some hard-to-detect fashion. If so, this neuron birth may somehow be harnessed to shore up brain function as we age or confront conditions like Alzheimer’s disease.

The scientific debate on this question has been controversial, with a sticking point revolving around definitions: exactly what constitutes a newborn neuron, versus an intermediary or a precursor, or a late-bloomer neuron that takes longer than usual to mature? In the past, researchers have relied on the expression of a handful of molecules to identify cells at these different stages, but this has resulted in different answers. Now the new technique of single-cell transcriptomics gives researchers access to a profile of all the bits of DNA that a cell turns on or off. This enormous amount of information per cell gets at the heart of cellular identity and could provide a clear signature of a newborn neuron.

Two recent studies use this new technology to address the question of new neuron birth in adult humans and — alas, come up with different, opposing answers again. One study compared data across species and obtained a cellular signature of newborn neurons in the adult brains of species, such as mouse or pig, known to generate neurons in adulthood. This profile, however, was notably missing from the human brain, thus suggesting no new neurons for human adults. The second study took a different approach that relied solely on human data: using newborn brain data to provide a “ground truth” for a newborn neuron profile, the researchers also found this profile among adult cells, thus supporting the notion of newborn neurons in adult brains.

Together the studies present a sobering truth about obtaining cellular identity from genetic data: it’s complicated. As more researchers use the technique, one hopes that researchers will settle on rules for what is and isn’t a new neuron. In the meantime, this detailed look at the inner workings of single cells will surely highlight neuron diversity in a way that will aid the understanding of the human brain in health and in disease.

Read more in the latest issue of neuroDEVELOPMENTS, or view the archive of past issues.