The Lieber Institute for Brain Development’s greatest resource is its collection of donated brains, the largest collection of brains in the world that’s devoted to enhancing science’s understanding of psychiatric disorders. Each brain is donated by a bereaved family just hours after the loss of their loved one. Many of the donors struggled with the psychiatric disorders studied at the Lieber Institute, including schizophrenia, suicide and bipolar disorder.

The Lieber Institute’s donor families say donating has helped enable their healing. They know their loved one’s brain is a necessary component of the science that aims to find new treatments and diagnostic tools for psychiatric disorders that devastate patients and their families. They hope their donation will lead to science that benefits other people like their loved one, and other families like their own.

But don’t just take it from us. We’ve collected the stories of some of our brain donor families so they can share their experiences in their own words. Please read their stories, including precious memories of their lost loved ones, below.

Priscilla Agnew-Hines will never forget her son’s beautiful eyes. She thought of those eyes when hospital staff approached her to donate his organs when he passed in March 2020. His beautiful eyes could live on, giving sight to someone else.

She also agreed to donate his brain to the Lieber Institute for Brain Development. Her donation became 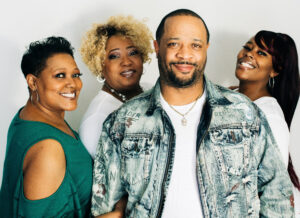 part of the most extensive collection of donated brains of African ancestry in the world. Lieber scientists are gathering genomic data from the collection to correct a significant disparity in brain science—81 percent of the large-scale genomic datasets that scientists have used to study the human genome come from people of European descent. However, this group makes up less than 16 percent of the world’s population.

Larry Agnew was 41 years old when he died with a deadly mix of substances in his blood. He was a kind man, devoted to his church. He had a loving family. Larry played elite football in high school, was a member of his church band and taught drums. He began playing drums at the age of three—his grandfather led a family singing group, and little Larry traveled and performed with them.

“My son was a light,” Priscilla says. He never met a stranger. As a child, on a hot summer day, he would bring home neighborhood children his mother had never met to share his precious cache of popsicles, she recalls.

As an adult, Larry struggled with substance use. He had experienced childhood trauma and was a victim of gun violence as an adult when he was shot in the leg at the age of 39.

His life began to take a different track in his junior year of high school, his mother remembers. His mother recalls that he had to repeat 11th grade and lost an exciting opportunity to play football in Hawaii.

“Life shifted for him,” Priscilla says. She knew he was drinking and using drugs. Over the years, she reached out to him and tried to ask what was wrong and how she could help. Larry wasn’t able to beat his demons.

“When you see a person spiraling down, you try to connect with them, try to find a reason why,” she says. “No matter what you do as a parent to try and support that individual, there has to be something that triggers them to want to change.”

His mother cherishes her memories of Larry: his beautiful eyes and how grateful she felt that he was able to walk her down the aisle at her wedding before he passed. She also wonders what is different about Larry and other people who struggle with substance use.

“There are so many of our young people here who are addicted to drugs,” says Priscilla, who has studied to become a substance use recovery coach since Larry’s passing. “What can I do to discover what causes them to lean on drugs? What’s the triggering point that causes addiction? Is it mental illness or an underlying issue of genetics?”

Her friends and family were surprised when she announced at his funeral that she had donated his organs, including his brain, which would help advance neuroscience.

“If you look at the statistics, with African Americans, we don’t have enough participation in studies to fully understand” what drives certain people to addiction or to suffer from posttraumatic stress disorder, Priscilla says.

“So how can you evaluate what is the common denominator? I hope we can help them locate some of those genes. I want to do whatever I can to discover what causes people to lean on drugs.”

Gianni Manganelli’s parents began preparing him to be his best before he was even born. His father, Robert Manganelli, would talk, sing and hum to him while Gio, as his family called him, was growing in the womb.

“He’d become accustomed to it,” Robert says. “At certain times of day, I’d come in and talk or hum to him, and he’d settle right down.”

His parents ensured he had every advantage as he started in life. “You could tell he was very bright. He

started to read really early,” Robert recalls. As a young adult, Gio dreamed of being a space scientist. He interned with an astrophysicist at Caltech and helped operate a high-powered telescope in Hawaii. He worked on a team that discovered a new supernova. Gio was inspired and began working on the prerequisites to become an astrophysicist.

Though he became deaf by age 4, like his mother and sister, Gio always loved music. One of his family’s most treasured memories is a video Gio made of himself dancing and signing along to a favorite song.

Gio’s loved ones are left to treasure those videos and photographs. Gio took his own life in 2014 at the age of 23.

When Gio died in suburban Maryland, just outside of Washington, DC, his family chose to donate his brain to the Lieber Institute for Brain Development. They were hopeful that the Institute’s research could lead to diagnostic or therapeutic breakthroughs to help other families like their own.

Gio’s father, Robert, has spent the years since turning his loss into art. Robert is an experienced filmmaker who holds an MFA from the UCLA film school and has shown two projects at the Sundance Film Festival. He is working on a documentary about fathers who have lost children. He’s traveling the country, chronicling his subjects’ grief and healing.

Robert’s own story has crept into the film, despite his original intentions to focus on others. He and his partner, Deanna Cook, recently visited the Lieber Institute to film interviews and visuals for their documentary.

“When your son takes his life, you question everything,” Robert says. “You ask, did I put pressure on him? Did I contribute to his anxiety? That’s my cross to bear for the rest of my life. What more could I have done to help him?”

Robert says that talking with other grieving fathers and the scientists at the Lieber Institute has helped.

“Filmmaking is a way of processing all of it; it’s my therapy,” he explains.

In the latest of his visits to the Lieber Institute, he spent time this summer filming the dozens of deep freezers that hold the more than 4,000 donated brains that power the Institute’s science. Robert says it was a sacred experience, being so close to Gio’s brain and imagining its potential to help scientists learn more about suicide.

“I’ve visited your facility and each time came away with a deep appreciation and humility—not just for the work Lieber is doing, but how you do it,” Robert says. “You have treated my son and my donation with such reverence and care.”

Stafford Nibley’s parents cherish their memories of his beautiful singing voice, his acting and athletic skills, his outgoing and, by contrast, sometimes shy nature. He was sensitive and intelligent, precocious and cheerful, they recall.

After graduation from high school, when Stafford’s friends were going off to college, he planned to attend 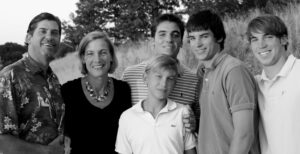 Catholic University to study music in the fall of 2014. He had starred in numerous musicals in school, at community colleges near his home in Washington, DC, and at the Theater Lab in Washington, and dreamed of a career in musical theater.

Instead of preparing for college, though, Stafford and his family took a different path. They continued their long, painful journey searching for relief from the mental illnesses that tortured him. His diagnoses included depression and borderline personality disorder, as well as addictions to the drugs and alcohol he used to self-medicate.

The Nibleys tried everything. Stafford enrolled in 43 rehabilitation and mental health programs in the last 10 years of his life. He was hospitalized 20 times for self-harm incidents. His family did all they could to save him.

Still, in May 2021, the Nibleys lost their Stafford. He died at the age of 25, suffering from an overdose and, as the family noted in their long and loving obituary for their youngest son, “the effects of a lifetime of mental illness.” The death was characterized as a suicide, though it is impossible to know Stafford’s intentions.

In the haze of their grief, Stafford’s family got a call from Dr. Thomas Hyde, Chief Medical Officer of the Lieber Institute. He described a research program dedicated to finding the genetic mechanisms that make people like Stafford vulnerable to mental illness, addiction, and death at such a young age.

In their research, Lieber scientists use cells collected from the brains of deceased people who had been diagnosed with certain mental illnesses in life. Dr. Hyde asked if the family would be willing to donate Stafford’s brain to the Lieber Institute.

“There wasn’t a second that we hesitated,” Stafford’s father, Stuart, recalls. “Of course, we wanted to do that. Maybe his struggle and his life were not futile. Maybe he can begin to help advance the understanding of the brain. It gives us a sense of purpose.”

Lieber Institute scientists are seeking the “why” to explain how patients like Stafford, who have accessed and exhausted all available resources and treatments, can still have tragic outcomes. If scientists understand the genetic mechanisms that make people prone to mental illness, as well as the environmental triggers that turn on those genes, they could create effective treatments that target those mechanisms.

“We’ve realized the current state of medical and psychiatric treatment is just not at a point where it could help Stafford,” says Stuart. “That’s the point of the Lieber Institute’s research.”

In the wake of Stafford’s death, his family and vast network of friends and loved ones have donated in record numbers to the Lieber Institute in his name. His parents vow to do whatever they can to help advance the science that might save others like him.

“God gave Stafford to me for 25 years,” his mother says, as her eyes fill with tears. “He was such a gift. I never gave up on him.”